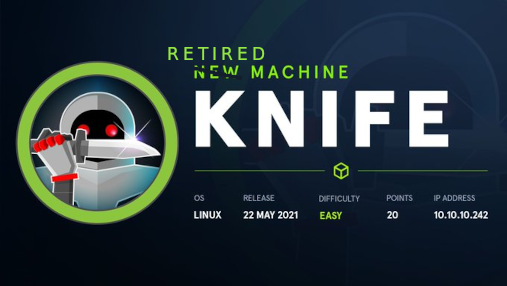 To solve this machine, we begin by enumerating open ports – finding ports 22 and 80 open. On the webserver, we find a static webpage. Enumerating the server infrastructure, we find the backend contains a backdoor. Exploiting the backdoor, we get a reverse shell on the machine as james – and can read user.txt. After enumerating commands james can run via sudo, we find james is able to run a Ruby script as root. Exploiting the script, we are able to get a reverse shell as root – gaining access to root.txt.

Like all machines, we begin by enumerating open ports with nmap – finding ports 22 and 80 open.

Since there is a web server running, we initiate automated scans with nikto and gobuster, however, the only significant thing that stands out is that the webserver is hosting php 8.1.0-dev. Going to the webserver in our browser, we are presented with a medical webpage.

When we try to click the links, they do not work. Since the backend language and webserver version is all we have, we will look more into them.

Since the version of php running on the webserver seemed interesting, we decide to look more into it. We look at exactly what server headers are returned, and use searchsploit for a quick lookup. Searchsploit did not return any results, however, since php is a relatively new version, we decide to do more extensive research on it.

We start by Googling “php 8.1.0-dev exploit”, however, this did not bring up any identifiable resources. Next, we decide to broaden the search term to “php 8.1 exploit” and find this article. It informs us that there is a backdoor that allows us to execute php code within an HTTP header.

Additionally, it links us to the malicious commit, which we review to develop an exploit. Upon review, the remote code execution is achieved by essentially creating a new php $_SERVER[] key named “HTTP_USER_AGENTT”. To exploit it, we have to send an HTTP header named “USER-AGENTT”, and start our malicious code with “zerodium”.

Using the source code as a guide, we craft an exploit using python. After verifying nc is hosted on the machine, we use php to get a reverse shell as the james user – gaining access to user.txt.

Having gained access to the remote machine as james, we begin our local enumeration. The first thing we try is sudo -l, which reveals a command we can run as the root user – /usr/bin/knife. Since this is an unusual program, we look into it further, and see that it is a Ruby script.

Since we are unfamiliar with knife, we research it, and find this website. Looking at the subcommands, we see exec, which says it will run a ruby script.

Since we are essentially given permission to run Ruby scripts as root, we write a reverse shell into a file. Next, we start a reverse shell listener with netcat, and use sudo knife exec to execute it. Once the script executes, we are given a shell as root, and can now read root.txt.