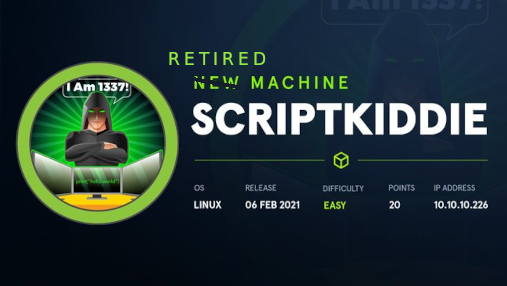 Like all machines, we begin by enumerating exposed services using nmap – finding ports 22 and 5000 open.

Based on the results, we learn port 5000 is running a webserver. We use gobuster and nikto to enumerate it, however, do not find anything significant. Going to the main page, we are presented with a page that seems to be used as part of a hacker’s toolset.

On the webpage, we mess with the input forms to try to learn what the different tools do. As their titles suggest, they are a frontend to nmap, msfvenom, and searchsploit, respectively.

We attempt to inject metacharacters into the form fields to test for template injection, SQL injection, etc., however, the application does appear to be performing input validation. Next, since the msfvenom tool allows for uploading a template, we decide to research “msfvenom exploit template”. Doing so, we learn that Metasploit <= 6.0.11 is vulnerable to command injection when generating an Android apk using a template, and find an exploit for it. Unfortunately, we are unable to verify what version of Metasploit/msfvenom is installed on the remote machine, so we take a leap of faith and use the exploit. We are able to set the payload by editting the exploit script – changing it to be a bash reverse shell. Since the payload is in the packaged APK file that is generated, there is no need to run the msfvenom command.

After the malicious APK is generated, we start our netcat listener. We can upload the malicious APK to the webserver and set the “os” to “android”. After we press “generate” we get a reverse shell as kid, and can now read user.txt.

Having gained a shell as kid, we begin initial enumeration of the machine before we run automated scripts. In our enumeration, we find that we are able to read /home/pwn/scanlosers.sh. Looking at the script, it appears to monitor /home/kid/logs/hackers for entries, then launch a port scan against logged IP addresses.

After further examination, there appears to be a code injection vulnerability in that the script takes the text from the third word to the end of each line, and uses it as part of the nmap command. To verify this, we need to check that we have write access to /home/kid/logs/hackers. We do, so we can try to build a proof of concept. Due to the nature of the script, we can assume the hackers file is constantly monitored for entries. From prior experience (via GTFOBins), we know that we can use the “–script” nmap flag to execute system commands. To help with building out an exploit, we can upload and execute pspy.

As seen, the /home/pwn/scanlosers.sh script executes upon write to /home/kid/logs/hackers. Nmap runs as it should, but errors out, as “127.0.0.1.nmap” is not a valid hostname or IP. To mitigate this, we can add “& #” to background the process, and comment the rest of the command line so “127.0.0.1.nmap” is ignored. For our malicious script, we create a bash reverse shell (nmap scripts are written in lua). Next, we start a netcat listener, and send our malicious script injection line to the hackers file. Doing so, we get a reverse shell as the pwn user.

After getting a shell as pwn, we begin basic checks before running automated scripts. After running sudo -l, we see that we are allowed to run msfconsole as root without a password. Msfconsole allows the user to run system commands from its command line, so we can easily get a shell as root. For this, you can just run “bash” after the program starts. Instead, I chose to get a reverse shell using bash. In either case, we can now read root.txt.